Hotel Bologna is located in a residential district close to Florence old town center, in an urban area with all the main services, excellent restaurants and pizzerias, coffee shops, wine-bars, elegant shops, banks and post offices.

Florence old town center, with its Duomo, Piazza della Signoria, Uffizi Gallery, Accademia Gallery and Ponte Vecchio, is within an easy walk of the hotel, or at a few bus stops from it (bus number 14 stops at 200 mt from us).
The closer attractions, museums and monuments are Santa Croce Basilica, Casa Buonarroti, Donatello Square with the adjacent Gherardesca Garden and English Cemetery, Porta San Niccolò with its beautiful medieval Tower. We are also within easy reach to Florence University, Archaeological Museum, Natural History Museum, the Synagogue and Piazzale Michelangelo, from where you can take the most amazing panoramic pictures of Florence.

HOW TO REACH US


BY CAR
Hotel Bologna is just a few kilometres from the exit of FIRENZE SUD (A1) , also recommended for who is arriving from the north (when you see Firenze Nord, continue to direction Roma until the exit of Firenze-Sud). Once you leave the motorway keep going along the junction until the end, turn left at the traffic lights (Via E. De Nicola) after 3 more traffic lights turn right in Via del Ghirlandaio, go straight on and turn left at third crossroad (via Gioberti); turn left at the first and you are in Via Orcagna, the Hotel Bologna is on the left side of the road at the nunber 50.

BY TRAIN – FROM SANTA MARIA NOVELLA STATION
BY BUS
From the train station Santa Maria Novella, having the trains behind you, take the exit on your left, and turn left without crossing the road; on your left there is the bus stop of number 14, direction Ripa / Il Girone and you have to get off at the second stop of Via Arnolfo (Name of the bus stop: Orcagna), ask to the bus driver. Turn back on the opposite direction of the bus, we are the first street on your right. This is Via Orcagna at number 50, from the corner you'll see our green curtain.

BY TRAIN – FROM SANTA MARIA NOVELLA STATION
BY TAXI
Taxis are always avalaible in front of the station, it costs about € 20, according to traffic.

BY TRAIN – FROM CAMPO DI MARTE STATION
ON FOOT
From the train station Campo di Marte, having the main entrance behind you, take the street on your left, Via Mannelli for about 300 mt.; turn right on the first street, Via Capo di Mondo, and go straight on for 500 metres until you see our green curtain on your left side of the road.
Walking distance about 10 minutes.

BY TRAIN – FROM CAMPO DI MARTE STATION
BY TAXI
Taxis are always avalaible in front of the station, it costs about €10 , according to traffic.

PARKING
These are your parking options near the hotel:
Public parking is available along the street, by paying in the machines at a price of € 1 per hour or buying at the hotel reception one ticket valid for 24 hours at the cost of 10€.
Alternatively we have the possibility to book a parking space in a garage, which is about 400 meters from the hotel, whose daily price varies from 15 to 30 euro depending on the number of nights and size of the vehicle. 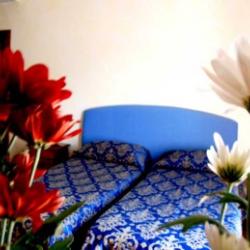 Offer Direct Booking Two Star Hotel in Florence in a Peaceful StreetBook directly a good value for money two star hotel near the center of Florence!
See all 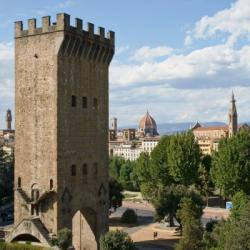 Visit to the Tower of San Niccolò in Florence, Open Only in Summer

One of the most impressive monuments in Florence and on of the closer to Hotel Bologna is certainly Porta San Niccolò, also known as Tower of